Being Women's Day today this was the ideal challenge...'Chocolate'. Happy Women's Day to all you fabulous Women out there. I have mentioned at least three in this post who have made this post possible! Special thanks to Elizabeth, Manju and always you Shireen.

When I heard my good friend and college mate Shireen Pais-Sequeira of Ruchik Randhap chose Cacao, Cocoa or Carob for the Bread Bakers' March event, I was super excited. Many ideas flashed through my head. Thank you Shireen for hosting this lovely theme! 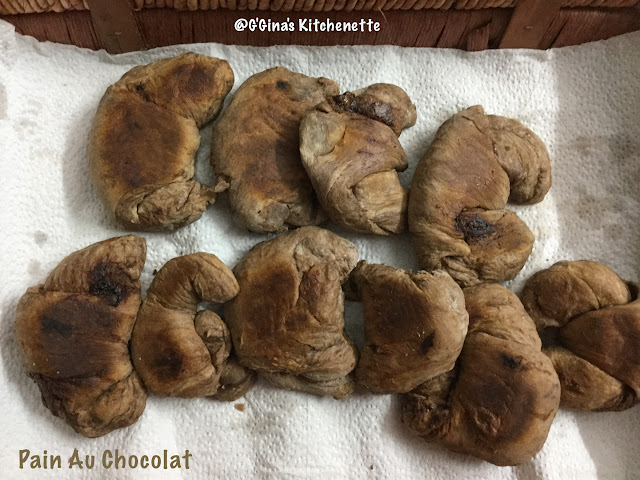 I have had a secret nickname given by my ex-colleague and friend Thomas Forsch...'Chocolate'. Yes he called me Chocolate, because he knew I could be bribed with Chocolate. He challenged me to a work related challenge at the company we worked at and when I met the challenge, he promised me the best chocolate cake there ever was! And yes all of it was all for me. I still remember when that day finally arrived, of how my buddy Nina Silva called me as I just finished conducting an interview. She told me of how she had opened the cake box and started sharing the cake. I was furious with her and she couldn't help but burst into a roar of laughter!! 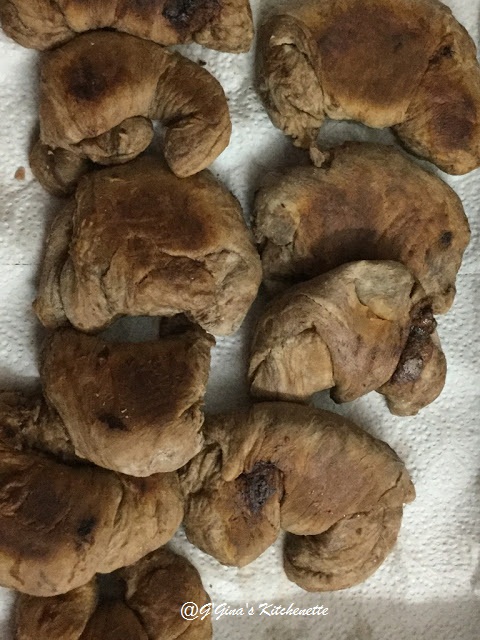 Nothing has changed since then, I can still be bribed with chocolate. I also remember how a friend got out of an angry situation with me back in college days with a bar of chocolate. I didn't realise until I had actually cooled off. 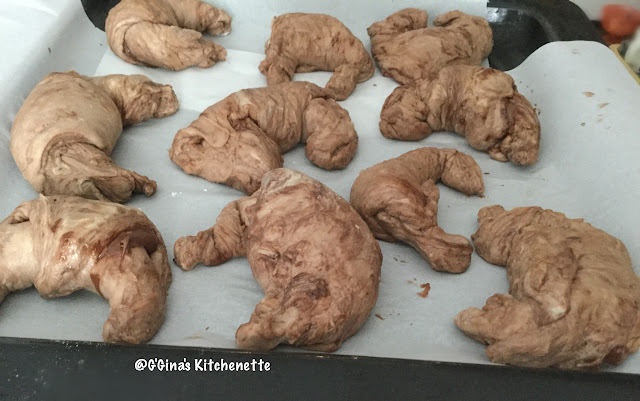 Coming to the challenge, I had never made croissants before and recently I took up a dessert
challenge that had eaten into two full days of work and sleep time. It didn't turn out as expected but
the customer was happy and that was what mattered the most. While I began this challenge all excited, it got ugly pretty fast. To avoid a similar turn of events as the dessert challenge, I spoke to my recent good friend and fabulous neighbour Elizabeth Rita Samuel of whether she had made croissants earlier while we were walking up in school to pick our kids. She said that she had just made a batch of dough waiting to be baked after we returned from school for her lovely daughter Joanne who incidentally has become my daughter's favourite friend. We mums call them two peas in a pod.

As luck has it, apparently Elizabeth has had a lot of experience with croissants esp.when she stayed at Belgium. She told me some of the challenges involved with making croissants in such a challenging environment as we stay in a tropical place where the humidity levels are high and hot. Summer decided to come in a tad earlier this time. "Everything must remain cold" is what Elizabeth said and that means returning the dough each time during the preparation process back to the refrigerator. The rolling pin went in to the refrigerator as well. Elizabeth spoke of the ratios of ingredients and how to roll and shape the croissants. 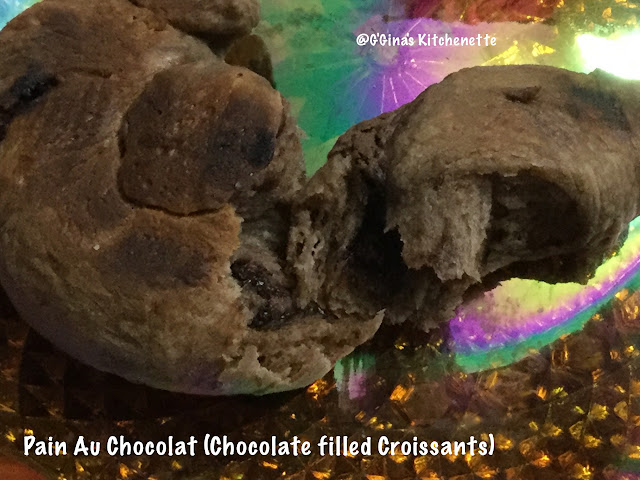 I then came up with one more idea which was to freeze my room and kitchen as much as possible
which meant all doors were closed and I turned the aircon down to 18°C, as low as it would go. 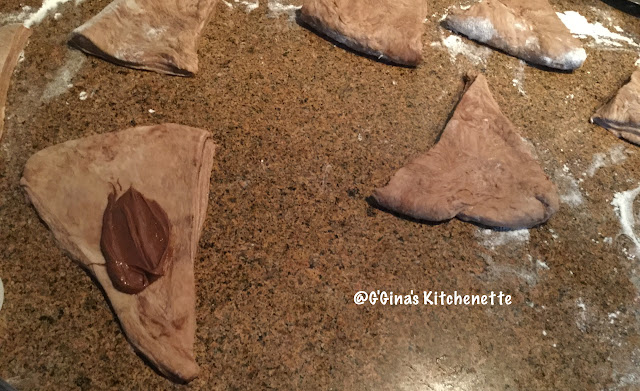 Since this challenge was all about Cacao, I decided to include it both in the dough and in the filling.
'Pain Au Chocolat' traditionally has a half moon puff pastry look filled with chocolate pieces and translates literally to 'Chocolate bread'. But like I said I wanted to try the traditional look of croissants as Elizabeth spoke of since it was the first time I tried my hand in croissants. The dough essentially of the croissants and 'Pain Au Chocolat' is the same. It is the shape that differs.  Of course, the chocolate filled croissants also gained the name 'Pain Au Chocolat'. So it was a win- win situation either way name wise. 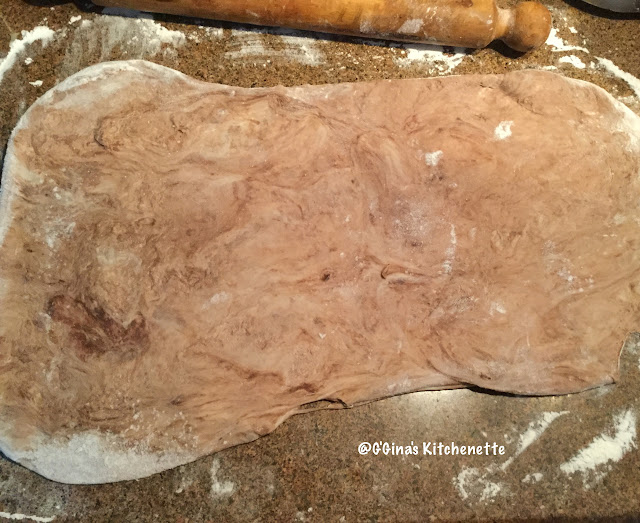 I seriously thought that all this would be a 'pain'ful effort with the turn of ugly circumstances that I mentioned earlier in this post which arose in the process of making these croissants. My workstation that I use to post all my recipes and do my multiple other jobs from met with a coma. It is on its way to another state to get fixed as the rotten retailer who promised an All-India service failed to meet its promises. Sigh!So as I write this post, I am still unsure of its successful post as mentioned to today's gracious hostess Shireen.


And now an update, the retailer turned out to be not-so- rotten after all. But it remains to be seen when I visit the service center this weekend *fingers crossed*.

You can use a normal egg wash to glaze the croissants, I used milk as we are on Lent. I finally completed this post on my neighbour friend Manjusha Manusmrithi's desktop as the IPad I tried to work most of this on started acting funny in the nth hour right before posting.

On with the recipe...

1. Place the yeast in a bowl and add the sugar and a tad bit of the milk. Stir until it dissolves. Then add rest of the milk except the one set aside for brushing. Set aside to cool down.


2. Combine flour and salt into a large bowl. Add the butter and using a fork combine until it crumbles together.

3. Add the milk-yeast mixture and gently combine until the dough comes together. The butter needs to remain in  pea-sized pieces. Next roughly shape the dough into a square and wrap the top of the bowl in cling film and refrigerate for 2 hours. If you like you can also freeze it for 30 minutes to hasten the process along.

4. Remember to keep your work tools as cold as possible. Next dust your cleaned work surface and rolling pin with flour. Start rolling the dough into a rectangular shape at least two or three times as long as it is wide. Do not worry if the dough is hard to work with at this stage. It will come together during the rolling and folding process that follows.

5. Next fold the short sides (breadth) of the rectangle dough into the middle.  Rotate the dough by a
half turn. Roll out to lengthen. Fold the short ends again towards the middle.

6. Next flip the dough over so the folded seams are underneath. Repeat the rolling and folding process steps 4-5,  four more times, giving the dough a total of five times of rolling and folding. Place the dough in a wide bowl and cover with plastic wrap. Refrigerate for 8 hrs or overnight.

7. On a lightly floured surface roll out the dough into a rectangular of 18" X 12".  Cut the rolled dough into triangles, it will make about 9 triangles of 14" long and 5" at base.


8. Place a chocolate cube or a tsp of chocolate in the center of each triangle base. Then gently roll the croissant starting from the wide part up to the top, curving the ends inwards giving it the croissant shape.


9. Place the croissants with final rolled tip side down onto a prepared baking sheet lined with parchment paper. Cover with plastic wrap and let rise for 2-3 hours at room temperature.

10. Preheat the oven to 220°C. Brush the croissants with milk. Lower the heat to 180°C and b ake for 20 minutes until golden brown. If your oven is anything like mine where the heat is only at the bottom, please turn over after the first 10 minutes.

11. Cool on wire rack before serving with your hot cuppa' coffee or tea.


Breads with Cocoa, Cacao or Carob in any form

Breads with Cocoa, Cacao or Carob in any form #BreadBakers is a group of bread loving bakers who get together once a month to bake bread with a common ingredient or theme. Follow our Pinterest board right here. Links are also updated each month on this home page.


If you are a food blogger and would like to join us, just send Stacy an email with your blog URL to foodlustpeoplelove@gmail.com.
Posted by Georgina K. at 18:05